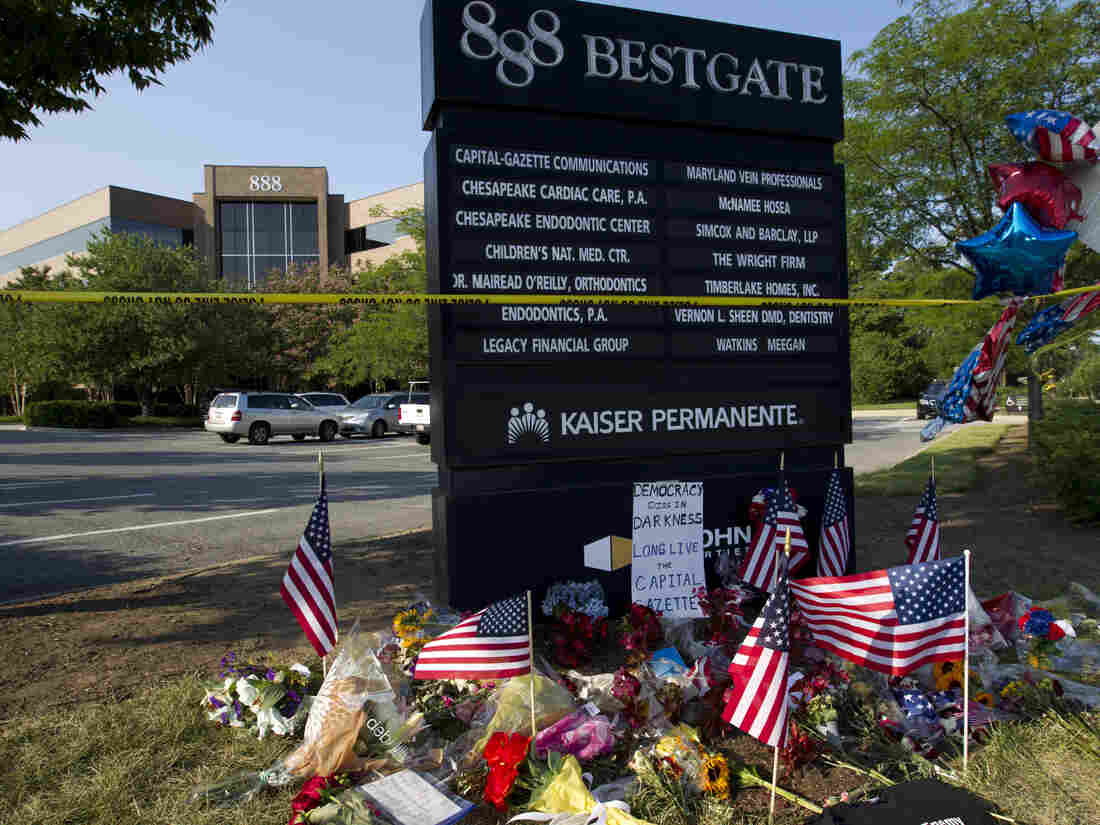 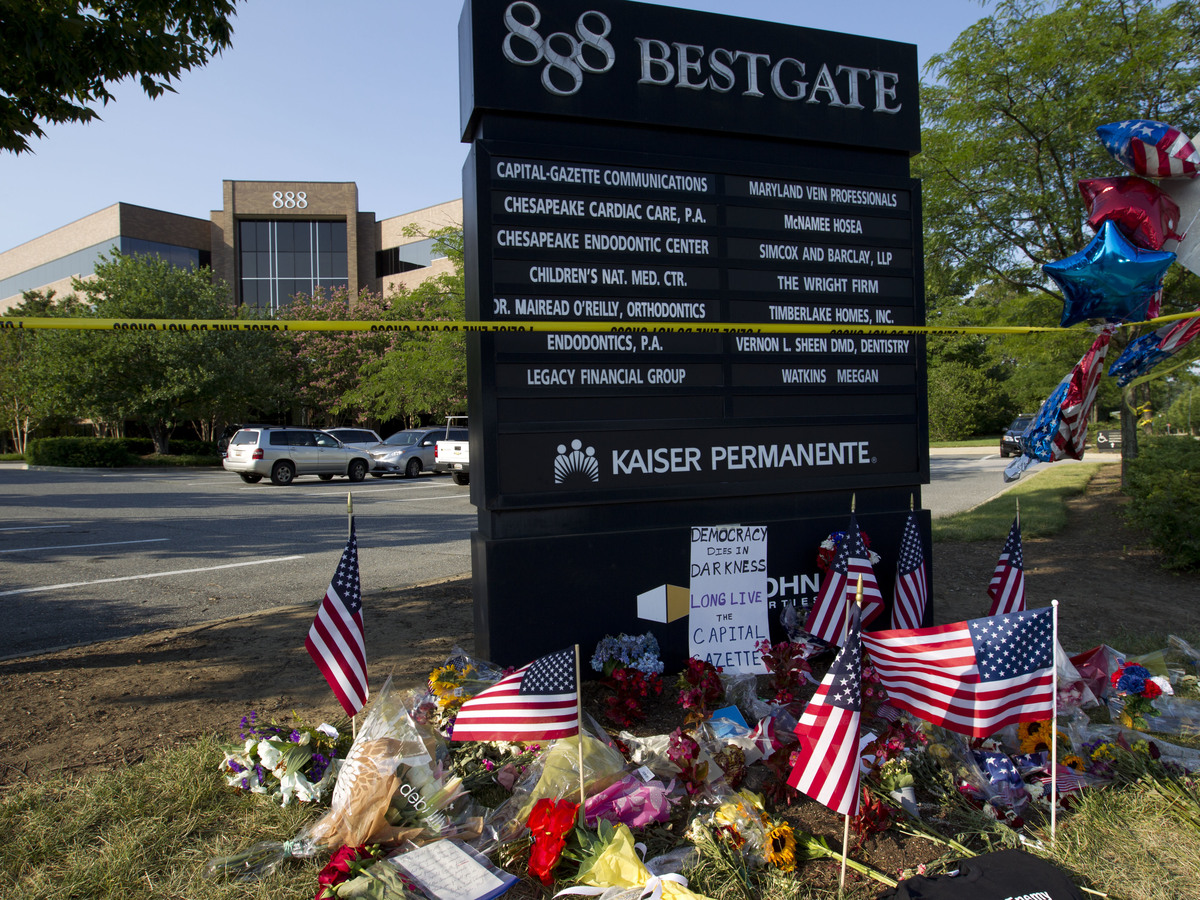 A makeshift memorial is seen outside the office building housing the Capital Gazette newsroom in Annapolis, Md., on Sunday.

President Trump has ordered U.S. flags to be lowered to half-staff as “a mark of solemn respect” for the four journalists and a newspaper sales representative killed last week at the Capital Gazette newsroom in Annapolis, Md. The proclamation came after Annapolis’ mayor said his request to lower flags had been denied.

“Our Nation shares the sorrow of those affected by the shooting at the Capital Gazette newspaper in Annapolis, Maryland,” says the statement signed by Trump and released by the White House on Tuesday morning. “Americans across the country are united in calling upon God to be with the victims and to bring aid and comfort to their families and friends.”

Less than 24 hours earlier, the City of Annapolis had confirmed to NPR that the president had declined its request.

“Obviously, I’m disappointed, you know? … Is there a cutoff for tragedy?” Annapolis Mayor Gavin Buckley said Monday afternoon, according to The Baltimore Sun. “This was an attack on the press. It was an attack on freedom of speech. It’s just as important as any other tragedy.”

Shortly after the order was released Tuesday, Buckley told the Sun that the reversal was “the least respect we could give the journalists. It’s a little bit of comfort.”

“Last night, as soon as the President heard about the request from the Mayor he ordered the flags to be lowered and a proclamation just went out,” Sanders said. “I spoke with the mayor last night and again this morning to let him know the President’s decision.”

The order applies to flags on public grounds throughout the U.S. and at diplomatic facilities abroad.

The president has said Thursday’s killings at the newspaper “shocked the conscience of our nation and filled our hearts with grief,” and said that “Journalists, like all Americans, should be free from the fear of being violently attacked while doing their job.”

However, since well before taking office, Trump has been openly antagonistic toward the press, calling it the “enemy of the American people” and frequently accusing the mainstream media of engaging in “fake news.”

Why was the FBI giving so much information to the Fake News Media. They are not supposed to be doing that, and knowing the enemy of the people Fake News, they put their own spin on it – truth doesn’t matter to them!

But Buckley, a Democrat, told the Sun that the scope of the tragedy at the city’s newspaper merited more than that.

“It’s not as noticeable when a state flag is down but you still have your main flags at full mast,” he said.

After recent mass shootings at high schools in Texas and Florida, Trump ordered U.S. flags across the country lowered to half-staff to honor the victims. He did the same after killing sprees in Las Vegas and in Sutherland Springs, Texas.

But while some have accused Trump of fostering a climate of disrespect and even violence toward the Fourth Estate, others note that his is a dilemma faced by all presidents.

The mass shootings in Las Vegas killed 58 people. At a church in Sutherland Springs, Texas, 26 were killed. At the Marjory Stoneman Douglas High School in Parkland, Fla., 17 died and at a high school and at Santa Fe High School in Texas, 10 were killed.

By comparison, the shootings at the Annapolis newspaper killed 5.

USA Today writes, “like his predecessors, Trump also faces a grim calculus: What differentiates a devastating crime from a truly national tragedy? Is it a matter of body count, or do some attacks carry with them a symbolic significance that transcends the police report?”

Even so, Brandon Rottinghaus, a University of Houston professor who studies presidential proclamations, tells USA Today that the Maryland shooting transcends the number killed because “the crucial role of the free press in America puts their status on par with any other government official.”

Some have also pointed out that President Obama also faced criticism in 2015 for failing to quickly issue a proclamation that the flag be flown at half-staff for five U.S. service members who were killed by a gunman at a naval reserve center in Chattanooga, Tenn. Obama did eventually make such an order, five days after the killings.