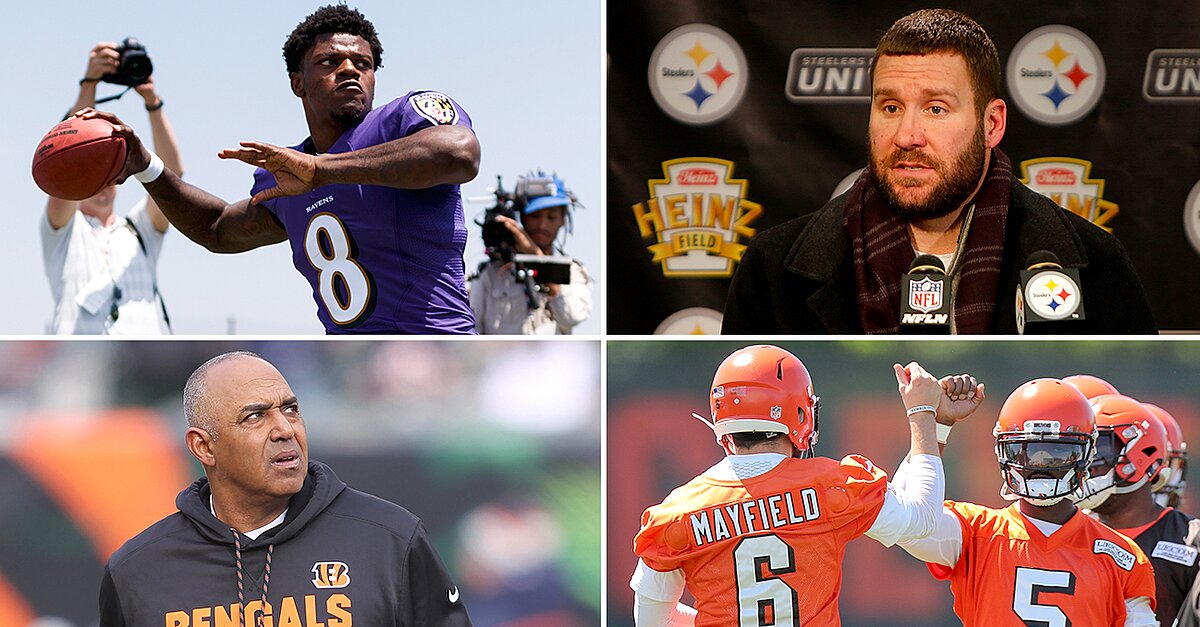 I think Ozzie Newsome left his final draft as Ravens general manager with a smile. This team is set up beyond 2018, and perhaps even for the second half of this season. Scoring a tight end to pacify Joe Flacco and a dynamic quarterback to replace him was one of the savvier draft day hauls in recent memory.

Baltimore was ninth in points but 27th in yards a season ago. Had it not been for a formidable ground game, the Ravens would have been rendered punchless. Enter Lamar Jackson, who provides the most significant challenge to Flacco yet. Something needs to be reimagined offensively in Baltimore, and with two of the league’s most innovative minds—Marty Mornhinweg and Greg Roman—locked in a room all offseason trying to figure it out, the product in 2018 must be markedly different.

This could be anything from a ho-hum repeat of 2017 to a version of the Houston Texans’ rise under DeShaun Watson. To Flacco’s benefit, he has (on paper) the best receiving corps at his disposal since the 2012 Super Bowl year. It would not be surprising to see Baltimore get much more vertical on offense this year, which is timely in an AFC North without many true lockdown secondaries.

Fact/tidbit/piece of news learned from OTAs/minicamp: While it is a well-worn offseason trope, Flacco has reportedly looked more comfortable and, therefore, accurate in OTAs. As the Baltimore Sun noted, there’s less talk about knee injuries, which is important to remember when talking about the 33-year-old, who is two years removed from ACL surgery and one year removed from a back issue.

Rainy Sunday afternoons are definitely for sitting on the couch, eating popcorn and watching Peter Pan as a lazy, happy fam

Letter grade: A. Long live Ozzie, who will be difficult to replace in Baltimore.

Feeling the pressure of the most significant breakup attempt yet, Marvin Lewis attacked free agency and the draft in attempt to fix Cincinnati’s porous offensive line. Cordy Glenn is in the fold, and interior lineman Billy Price, believed to be one of the surest offensive line prospects in the draft, was the team’s first-round pick. Will it be enough? Lewis built a roster good enough to perennially reach the playoffs, but needs to retool on the fly after an injury-ravaged 2017.

It’s easy to say the AFC North will fall in line and the Bengals will slide into third place again, but this could be a strange season. Cleveland is markedly better, the Steelers are getting older and the Ravens offense with Joe Flacco could finally run out of gas. There is an opening for a team like Cincinnati, who at least has some stability and Pro Bowl caliber weapons on offense.

Fact/tidbit/piece of news learned from OTAs/minicamp: Speaking of Ross, he’s in camp early this year, which is a lot more than the speedy wide receiver could say about his 2017 season. Lewis is talking tough, noting that he needs to see strides out of Ross in May and June before getting excited about September.

Thanks to @WingsAndRings for sponsoring the camp and providing lunch for all the campers! pic.twitter.com/iBNwmQo9Z8

Letter grade: B. Lewis is setting the table for a “save yourself” season. It will be fascinating.

Basic infrastructure. The Browns have a good enough offensive line, good enough wide receivers, good enough quarterbacks and a good enough defense. Head coach Hue Jackson will finally have his feet to the fire, and he knows a one-win season will not be enough to survive. Of all the changes this organization has gone through, the most significant was hiring an established general manager in John Dorsey to spend the bank vault of picks and cap space acquired by the previous regime. Eventually, it will need to be better than “good enough,” but six or seven wins would dramatically change the landscape in Cleveland.

Complementary defense. With Tyrod Taylor (for now) under center and a stable of versatile backs, Cleveland should be able to move the ball on the ground more effectively than in the first two seasons of Jackson’s tenure. While this won’t be a record-setting offense, it could be one that is able to grind out games with the help of defensive coordinator Gregg Williams’ unit. On paper, the combination of corners Denzel Ward and Briean Boddy-Calhoun, with safeties Damarious Randall and Jabrill Peppers is promising.

Although we’ve been saying this each of the past three years, the expectation is that the rubber finally hits the road in Cleveland and the Browns start staying in games and, at some point, start stacking wins. If not, we’re onto another coaching change. What does that mean in reality? More vintage Hue, which, at his best, included plenty of schematic influences from the previous college football season.

Fact/tidbit /piece of news learned from OTAs/minicamp: Via Cleveland.com, the Browns are making sure Tyrod Taylor wins the starting quarterback competition out of camp. Baker Mayfield is taking the ceremonial third-string reps, but in reality, how long will that hold?

Letter grade: B. And that’s just because we’ve all been fooled before. Like the Jaguars, who took a few years to turn promise into results, the Browns are in the stage where promise and hope must finally solidify to earn fans’ trust again.

Theoretically, Pittsburgh did their best to get younger and faster in the secondary, though this is still an offseason consistent with the club’s measured approach. The Steelers are still built to win now, which means striking the delicate balance between developing their young players and massaging their core of star offensive players.

Pittsburgh’s offense spent part of last season lost in the woods before hitting hyperdrive. It’s a foregone conclusion each year that Ben Roethlisberger, Antonio Brown and Le’Veon Bell will form one of the NFL’s most maddening offenses, but for how long? Roethlisberger spent a portion of the offseason steamed about the team drafting his possible successor. Bell, for another year, will enter the season with no long-term contractual stability. When will the personalities, expectations and disappointments become too big to handle?

Barring a Lamar Jackson takeover that revolutionizes Baltimore’s offense, this is still a Steelers team that can (and probably will) win the division. Though, how much longer is this a safe bet? With Roethlisberger turning 36, vacillating between retirement and a career resurgence, embattled by internal squabbles, what do we really know for sure about the Pittsburgh Steelers?

Fact/tidbit/piece of news learned from OTAs/minicamp: Per the great Ed Bouchette, the Steelers are experimenting with their rolodex of pass rushing, outside linebackers. After the Steelers defense was torched multiple times in big spots last year, the push is on to find a solution.

Letter grade: B. The Steelers are a great organization, and it’s nearly impossible to pacify three offensive megastars, especially one like Roethlisberger. And yet, here we are picking them to win the AFC North again.