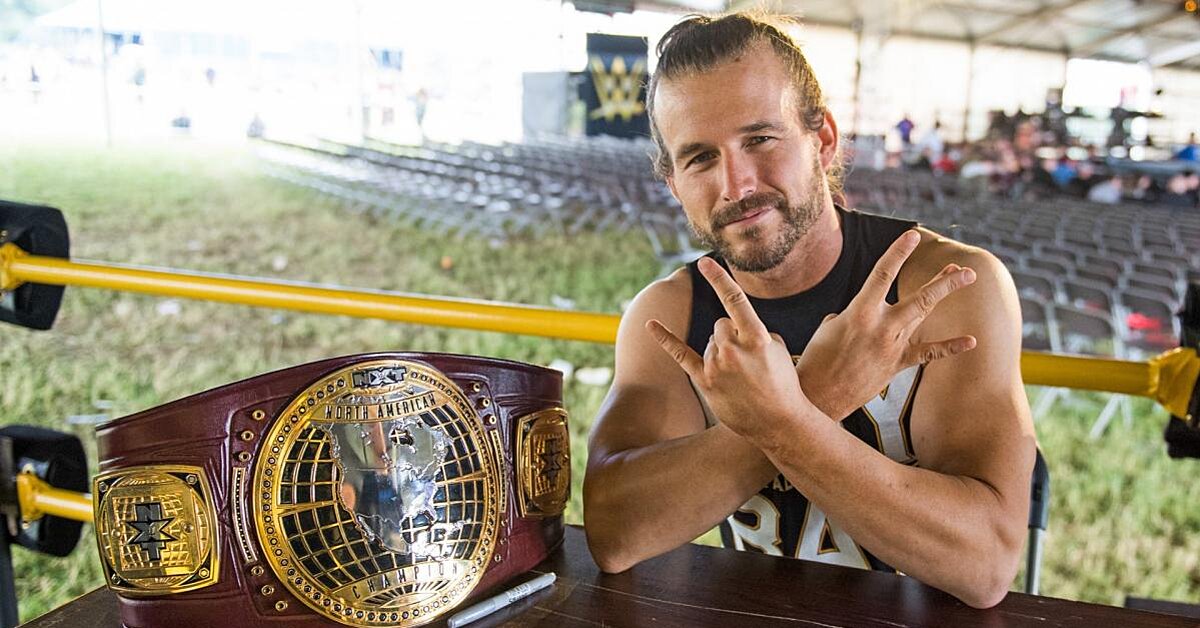 Adam Cole makes WWE history this Sunday when he defends his NXT North American Championship outside the confines of company soil.

Cole steps outside of NXT walls this Sunday in Melrose, Massachusetts, to battle European sensation WALTER in a match exclusive to live fans at EVOLVE 107.

The match with WALTER takes place only four days after Cole successfully defended the North American title in London’s Royal Albert Hall over Wolfgang, who is a former world champion in Scotland’s ICW, during the United Kingdom Championship Tournament.

“I’m not just the best in NXT, I’m not just the best in the WWE, I’m the best on the freaking planet,” said Cole. “Part of backing that statement up is competing outside of WWE, and the North American championship has given me the opportunity to do that. I can go to a company like EVOLVE and wrestle a talent as good, as big, and as strong as WALTER and defend my championship on a non-WWE show. That’s the epitome of making the North American title a world championship, one I can defend all over the world.”

Fantasy is becoming reality in wrestling. Cole wants to defend his North American title in matches around the globe against top-tier talent whether or not they are signed with WWE.

Cole became NXT’s first-ever North American champ at the TakeOver special in New Orleans during WrestleMania weekend when he defeated five other burgeoning stars—EC3, Ricochet, Lars Sullivan, the Velveteen Dream, and Killian Dain—in a physically and emotionally compelling ladder match. His debut in NXT was also unforgettable, as he eschewed the prototypical NXT entrance.

While most, like Bobby Roode, EC3, and even Keith Lee at this past Saturday’s TakeOver in Chicago, announce their arrivals by sitting in the crowd in a suit, Cole made his surprise debut last August at a TakeOver in Brooklyn by attacking then-NXT champ Drew McIntyre in a memorable introduction to the WWE brand.

“That played such a huge part in why it was so special,” said the 28-year-old Cole, who is a product of Lancaster, Pennsylvania. “It’s so cool when we see guys in the crowd, ones that we’ve fantasized about coming to WWE, in the crowd at these NXT TakeOver shows. You can begin to imagine what they’re going to do at the next TakeOver event. For me, you didn’t have to imagine because I showed everyone what I can do.

“I ran through the crowd, laid out Drew McIntyre, and stood in the ring and said, ‘Hey, I’m here.’ It was really cool to be so original. That was a testament to where Adam Cole is going and represented the impact that the Undisputed Era is going to make. Our slogan is ‘Shock the system’, and the epitome of that was our debut.”

The Undisputed Era consists of Cole, Kyle O’Reilly, Roderick Strong, and Bobby Fish, who were all once the heartbeat of Ring of Honor. Cole remains in rarified ROH territory as the company’s only three-time world champion, including a title win a over fellow Undisputed Era member—and former staunch rival—in O’Reilly 17 months ago at New Japan’s Wrestle Kingdom 11 in the vaunted Tokyo Dome.

For a deeper look at the man behind Adam Cole, a big part of his story occurred in childhood when his parents divorced. At nine years old, Cole—along with his mother and brother—moved in with his grandmother. In a world full of doubt and uncertainty, it was his grandmother who helped give life to wrestling dreams.

“My grandmother played a huge influence in my life and helped raise me, and she and my mother saw how much I loved pro wrestling and how much I wanted to go after it,” said Cole. “I’d been told countless times, even before I got into pro wrestling, that I would never amount to anything and that I’d never achieve this dream. You see more of the same when you’re inside pro wrestling. For me, my grandmother taught me that when you want something, you take it.

“Kyle O’Reilly, Roderick Strong, and Bobby Fish all share that exact same mentality. We said we’re going to take WWE and NXT over. Actions have to speak louder than words, and our actions have spoken much louder than our words.”

Cole left ROH in 2017 and brought his talents to WWE, placing complete trust in the knowledge that he would be learning from some of the best talent and sharpest minds in the entire wrestling world at the WWE Performance Center.

“If you sit around and wait for things to happen, they’re not going to happen the way you want,” said Cole. “When I look at my wrestling career when I first started, I was the guy who did anything he could just to get on every wrestling card he possibly could. I drove as far as I could, I flew when I could, I picked the brains of guys with more experience than me. For me, when I want something, I make sure I do everything in my power to get that.”

Another momentous occasion in Cole’s career took place this past January, when he made his Royal Rumble debut at number 23. Cole and his Undisputed Era brethren stand out through a blend of wrestling, promos, and presence—all with a noticeable chip on their shoulder, which was especially apparent during the TakeOver this past Saturday when Cole exchanged words on-air with pre-show host and Barstool Sports personality Pat McAfee, who also played for eight seasons in the NFL.

“Pat McAfee is real quick on his feet and he’s real entertaining to listen to when he talks, but every time I speak to Pat, I make sure he knows that he’s in my world,” said Cole. “This isn’t a football field, and I make sure he’s very aware of that every time we exchange words. Pat got a taste of that again on NXT TakeOver: Chicago’s pre-show panel. As long as Pat’s running his mouth the way that he does, I guarantee I’ll be there to back up every word that comes out of my mouth, as well.”

Cole will also need to back up his bravado this Sunday night against WALTER in front of a sellout crowd. WALTER’s chops are, in a word, ferocious.

“I would be lying if I said WALTER is not an extremely talented, tough, strong professional wrestler,” said Cole. “There is a reason I’m defending this title against him. I know how talented he is and I know how dangerous he is, but I’ve fought bigger, I’ve fought tougher, and I’ve won. WALTER is not going to be any different. I’m sure WALTER is going to give me the fight of his life, WALTER is going to push me to my limits, but I’m so used to being pushed to my limit. That’s just what I do. This is the biggest match of his career and it’s a big title defense for me, so we’re going to go at it with everything we have—and I’m fully confident that, when it’s over, Adam Cole is still going to be NXT North American champion.”

Cole was asked if Omega and the Bucks are talented enough to run with his Undisputed Era stable in NXT.

“Those guys would fit perfectly in the Undisputed Era,” said Cole. “They’re exactly what the Undisputed Era is all about: cutting-edge, going against the grain, doing what they want when they want. Obviously, a lot of people know my history with Kenny Omega, and I have a very long history with the Young Bucks, and those guys would fit perfectly. It’s like two peas in a pod.”

The 6-foot Cole returned to Florida on Wednesday night from London. Following Thursday night’s NXT television tapings, he will set his full focus on the 6’3” super heavyweight WALTER for a battle to remember this Sunday. He split his matches during the recent overseas tour; in addition to the victory over Wolfgang, the losing effort came in a six-man battle with O’Reilly and Strong against British Strong Style’s Pete Dunne, Trent Seven, and Tyler Bate.

“Any time I get the chance to come to the U.K., it’s always really special, and this was my first time in the U.K. with the WWE,” said Cole. “Performing and competing internationally has always been something I’ve sunk my teeth into. My first overseas tour was when I was 19 and went to Germany for the first time. I believe in everything we’re building with the Undisputed Era, and I’m also representing the company by holding their North American championship and putting that on display was really exciting. Royal Albert Hall is a historic building, and those matches with those fans were really something special.”

Cole’s next goal is to reach another pinnacle of success by defending his North American title around the globe, featuring new promotions and rivalries, beginning this summer.

“My journey is just getting started,” said Cole. “We’re only halfway through the year, and the rest is going to be even better.”