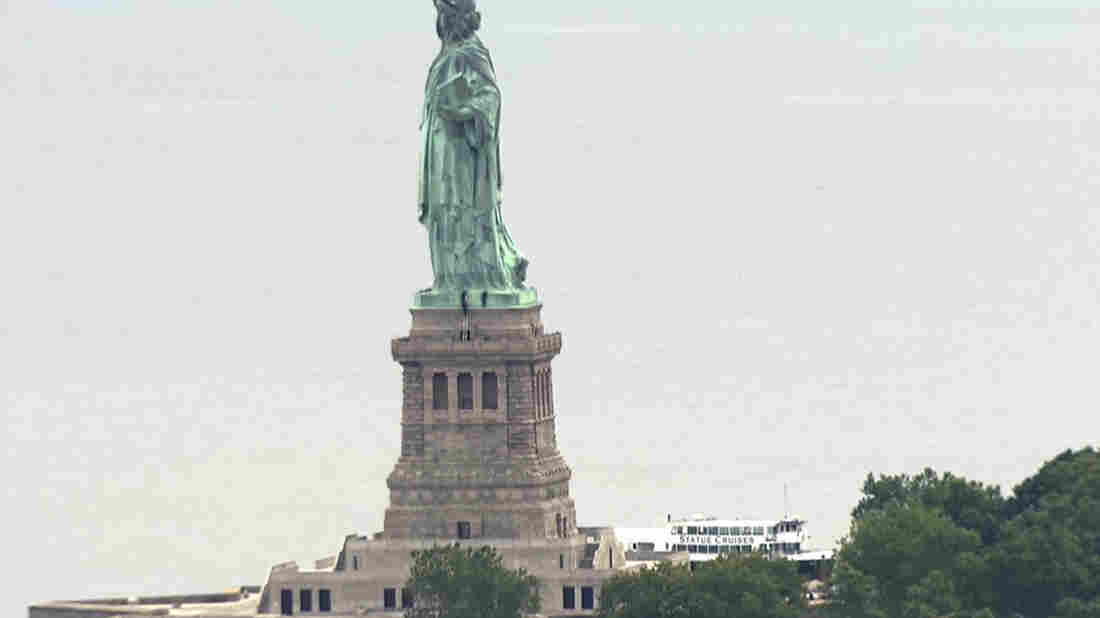 A woman was arrested after climbing onto the base of the Statue of Liberty and remaining there for three hours. She was protesting immigrant family separations. AP hide caption 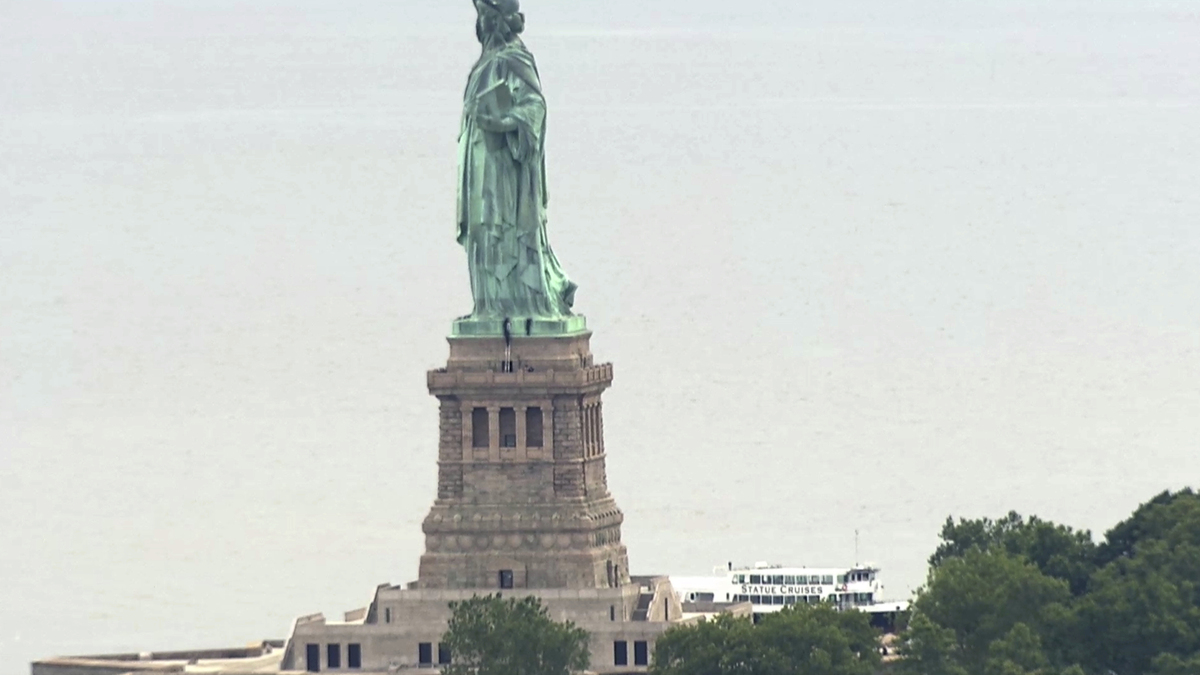 A woman was arrested after climbing onto the base of the Statue of Liberty and remaining there for three hours. She was protesting immigrant family separations.

Activists in two separate protests against the Trump administration’s immigration policies were arrested at the Statue of Liberty on Wednesday — one group unfurling a banner calling for the abolition of U.S. Immigration and Customs Enforcement, while in another act of defiance, a woman climbed the statue’s base to protest immigrant family separations.

Authorities evacuated thousands of visitors from Liberty Island, where the statue stands, after a woman climbed to the statue’s base around 3 p.m. and remained for several hours before police took her into custody.

About 4,500 tourists were forced off the island when officials closed it, according to The New York Times, which said more than 20,000 tourists visit the Statue of Liberty every Fourth of July.

Media reports identify the woman as Therese Okoumou. Video shows her walking, sitting and lying down on different parts of the statue’s base near the foot and robes. Two officers attached to ropes finally walked onto the base around 6:15 p.m. and led her to a ladder, where she climbed to the observation deck about 25 feet below.

NYPD Detective Brian Glacken told reporters the woman told them she was protesting the situation of “the children in Texas.”

He said it was “a really technical rescue just because of the slopes up there” and the lack of places to hold.

The New York Daily News reports Okoumou is an immigrant herself, having been born and educated in the Democratic Republic of the Congo. She now lives in Staten Island and has lived in New York for at least 10 years, the paper reports.

Earlier in the day, activists with the group Rise and Resist unfurled a banner nearer to the ground reading “Abolish I.C.E.”

“Our message was that ICE must be abolished, families must be reunited now, deportations must be halted, and the policy of detention as deterrent must end,” the group said in a statement. Activists with the group also spelled out the message on the ground using their shirts .

Rise and Resist, which reportedly formed after the 2016 election, said 40 people took part in the “banner action” and that Okoumou was one of them, though they were not aware of her plans to climb the statue later. According to the Daily News, Okoumou has taken part in several protests with the group previously.

National Park Service spokesman Jerry Willis told The Associated Press that at least six people were taken into custody for unfurling the banner. He said federal rules do not allow banners to hang at the monument, which is run by the park service.

The Statue of Liberty was dedicated in 1886 and has served as a symbol of the U.S. as a country of immigrants. Ellis Island, located next to Liberty Island, served as a processing center for more than 12 million immigrants between 1892 and 1954, according to the National Park Service.

“The Statue of Liberty was a reassuring sign that they had arrived in the land of their dreams,” the park service says. “To these anxious newcomers, the Statue’s uplifted torch did not suggest ‘enlightenment,’ as her creators intended, but rather, ‘welcome.’ Over time, Liberty emerged as the ‘Mother of Exiles,’ a symbol of hope to generations of immigrants.”

Over the weekend, protesters demonstrated in cities across the country against the Trump administration’s “zero tolerance” policies and its practice of separating families detained trying to illegally cross the Southern border.

More than 2,000 children were separated from their parents before President Trump halted the policy with an executive order. Last week, a federal judge ordered children to be reunited with their parents within 30 days. The Justice Department said Friday it would detain families together for more than 20 days.