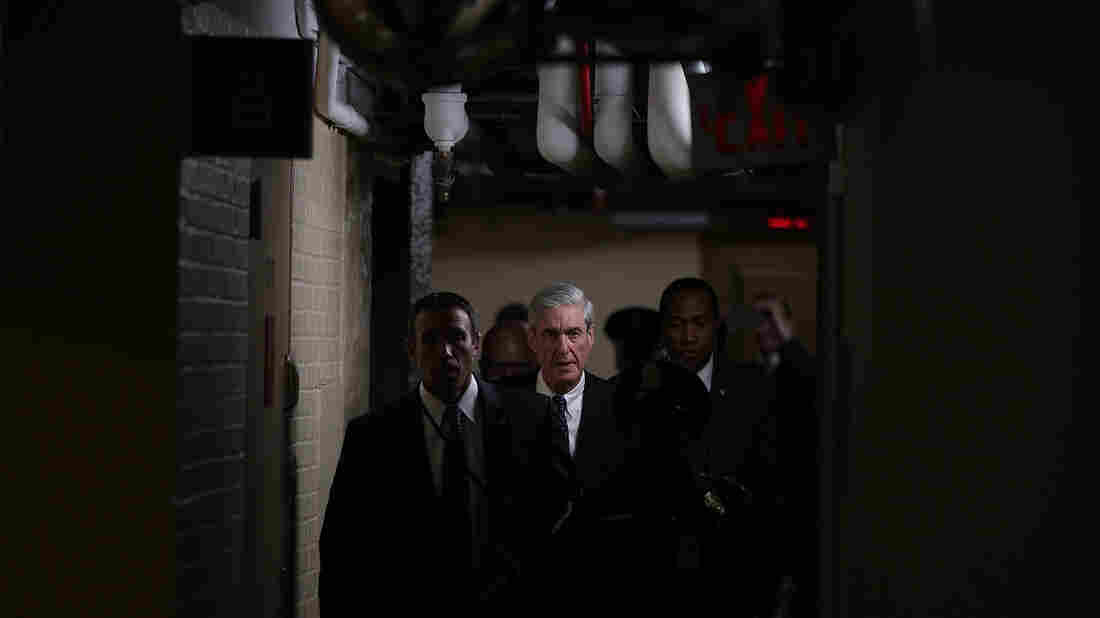 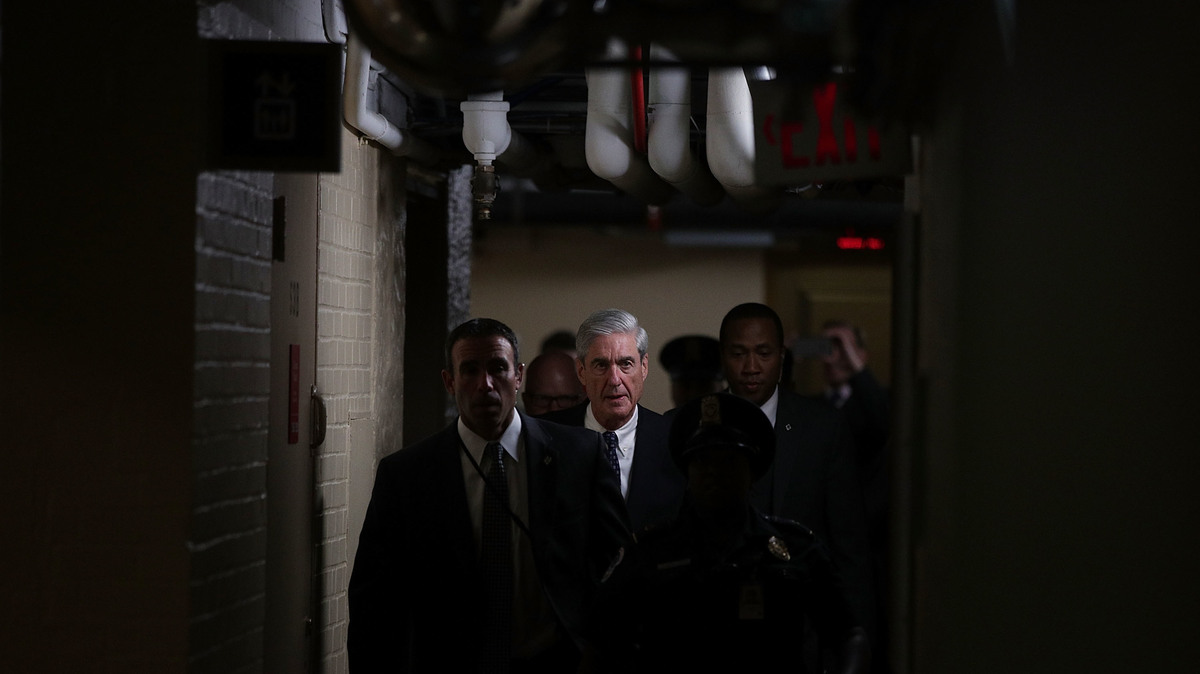 Special counsel Robert Mueller leaves after a closed meeting with members of the Senate Judiciary Committee last June at the Capitol in Washington, D.C.

Thursday marks one year since the appointment of Justice Department special counsel Robert Mueller. Has any public figure in the United States ever become such a partisan lightning rod after having said so little?

Mueller has achieved the unusual distinction of being both intensely reviled and deeply beloved after appearing on no TV programs and no radio call-in shows; in no newspaper interviews; and in no Snapchat stories, Facebook Live streams or Twitter threads.

Except, that is, for all the ones in which he has appeared — as the subject or as a character or as the victim of attacks or as a crusading grand inquisitor or in all the other roles in which he has been cast given the absence of his own face and his own voice.

Mueller appears to prefer to let his work do the talking for him. In that sense, he has spoken a great deal in the 12 months since his appointment by Deputy Attorney General Rod Rosenstein, following President Trump’s decision to fire FBI Director James Comey.

Mueller’s office has told a detailed story about a years-long campaign by the Russian government first to reconnoiter and then to attack the democracy of the United States. Thanks to Mueller, Americans know that Russian President Vladimir Putin dispatched his first intelligence officers as early as 2014 on a personal visit to cities across the country.

And they know that before Trump’s inauguration, then-national security adviser Mike Flynn was in contact with Trump’s advisers as he urged Russia’s ambassador not to retaliate against the punitive measures that outgoing President Barack Obama had imposed over Russia’s attack on the presidential election.

There remain many things, however, that Americans don’t know about what took place between these two events or what has taken place since. One big question, after 365 days of Mueller, is: How much he can or will still reveal?

The special counsel is not an avenging angel on a holy campaign to right the wrong that Democrats believe was the outcome of the 2016 presidential race. Nor is he a KGB commissar relentlessly hounding Trump out of personal animus on behalf of a conspiracy by the Deep State.

Those myths have clung to Mueller in part because he has not defined himself, creating the opening for others to define him to serve their own ends.

The latest example was in a tweet from Trump, who marked the anniversary of Mueller’s appointment by renewing his complaint that the whole special counsel investigation was baseless.

Congratulations America, we are now into the second year of the greatest Witch Hunt in American History…and there is still No Collusion and No Obstruction. The only Collusion was that done by Democrats who were unable to win an Election despite the spending of far more money!

The underlying question of what Mueller and his office are actually doing is nearly impossible to answer from the outside. The public only sees what the special counsel and his team permit them to see, and then usually only through dry legal documents and courtroom statements.

One year of investigating, prosecutions and plea agreements has provided a few clues.

The distinction is important because the types of work are quite different and can lead to very different results. In a counterintelligence case, investigators may never make an arrest or file charges. Their goal is to study the relationship between a foreign intelligence service and a subject in the United States with whom it might have been corresponding.

Instead of simply collaring an alleged spy, FBI special agents might try to turn him into a double agent, using their onetime target as a conduit to feed disinformation back to the foreign spy service or learn about what it knows. In the case of a foreign agent, the feds might simply ask the State Department to kick him out of the country.

The origins of the investigation Mueller is now running were as a counterintelligence case, following the overtures from Russian agents to a junior Trump campaign adviser, George Papadopoulos. He has pleaded guilty to lying to the FBI about that relationship and is cooperating with Mueller’s office.

Other people, however, may never be pulled into the same kind of web if it makes more sense for Mueller, the FBI and the rest of the intelligence community to watch them from afar or to respond in ways other than public prosecutions. And the public may never know (more of that in a moment).

So the counterintelligence approach can differ greatly from the better-known profile in which a team of G-men and G-women in blue windbreakers show up early to kick down a suspect’s door. Mueller’s unit includes that style of work, too, tied in with the first style.

The second approach is what has characterized the prosecution of former Trump campaign chairman Paul Manafort, who has not been accused of conspiring with Russia’s attack on the presidential election. Instead, prosecutors charge that Manafort violated banking and tax and other white collar-style laws. Manafort has pleaded not guilty and his attorney made clear early that the case was unconnected to any election interference.

The guilty pleas secured in the year of the Mueller team are over similar white collar-style transgressions; the most substantive was that of Manafort’s former partner and Trump’s former campaign vice chairman, Rick Gates. Other pleas — from a previously unknown Dutch attorney and a little-discussed online payments broker in California — are for lying to the FBI.

Mueller commands an eye-watering breadth and depth of information 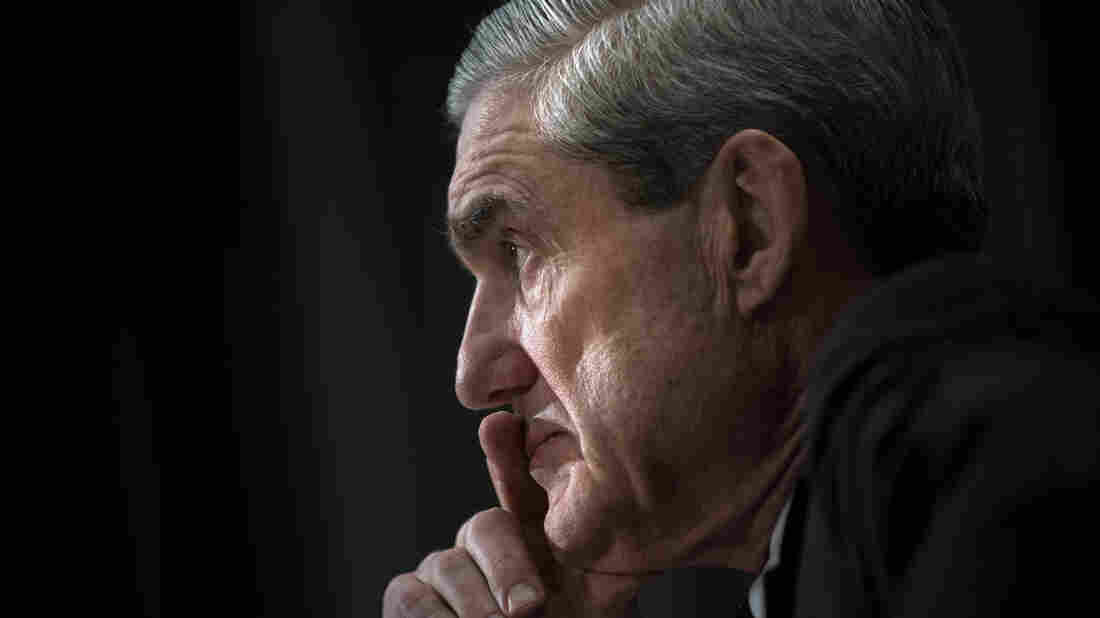 Special counsel Robert Mueller Mueller appears to have the full foreign intelligence and surveillance powers of the United States at his disposal, via both the FBI and potentially the National Security Agency or other arms of the intelligence community. Brenadan Smialowski/AFP/Getty Images hide caption 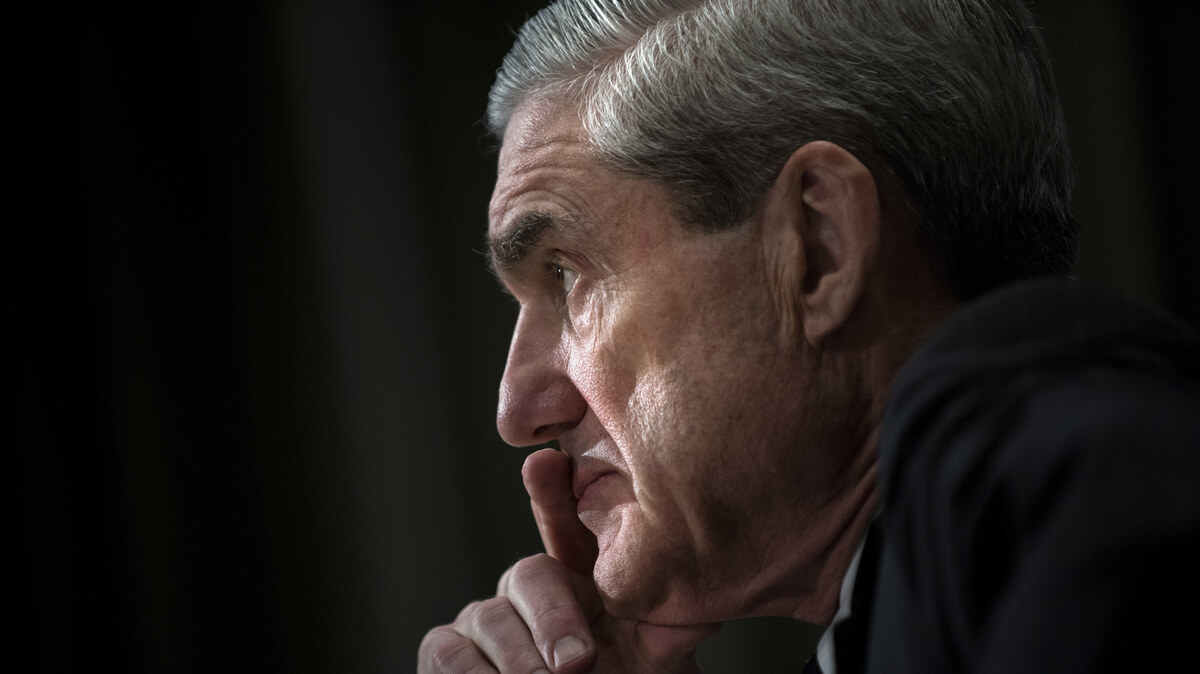 Special counsel Robert Mueller Mueller appears to have the full foreign intelligence and surveillance powers of the United States at his disposal, via both the FBI and potentially the National Security Agency or other arms of the intelligence community.

The special counsel’s office has described in court documents when and how Manafort was making changes in a specific Microsoft Word document.

It knew about the expense reports one of the Russian intelligence operatives filed about his travel to the United States.

It had the text of a personal email from a woman who worked in the Russian social media agitation campaign, who pinged a family member to say she had to stay late because the FBI had discovered what she had been up to: “We had a slight crisis here at work: the FBI busted our activity (not a joke).”

Mueller appears to have the full foreign intelligence and surveillance powers of the United States at his disposal, via both the FBI and potentially the National Security Agency or other arms of the intelligence community. This not only certainly helps him and his investigators, but it also certainly limits how much the special counsel’s office may be willing to discuss in the future about how it learned what it has learned. In fact, it may even complicate the work of investigators.

Suppose the NSA intercepted Russian Official A telling Russian Official B something about U.S. Person C that is important to Mueller’s work — but the NSA doesn’t want to reveal that it can record the conversations between these targets because it wants to keep on recording them. Mueller’s team may need to try to establish the same fact in other ways, especially if it wants to introduce the fact as evidence in a criminal case.

That may mean months of work to prove something Mueller already knows from another source. Or it may mean in some cases, Mueller can’t prosecute.

No one knows what inning this is

The complexity of Mueller’s task makes it impossible to assess the special counsel’s work from the outside, even after one year.

Read one way, the record thus far is encouraging for Trump and his administration — no conspiracy charges tying campaign aides to Russian active measures even after all this time. That result, or lack thereof, followed what Trump and his aides call historic cooperation by the White House and his presidential campaign, including with human witnesses and more than 1 million documents. Vice President Pence cited the one-year mark for Mueller’s work as a good opportunity for him and the special counsel’s office to “wrap it up.”

Read another way, Trump and aides still could have a great deal to fear. Prosecutors in New York City, D.C. and Northern Virginia are putting Manafort and Trump’s longtime attorney, Michael Cohen, under enormous legal pressure — can they stand it, or might they turn state’s evidence? What evidence has been given by the people who are already cooperating?

Big chunks of what is known and established about the 2016 attack on the election haven’t been addressed by the special counsel’s office, including the theft and dumping of emails that embarrassed Democratic political figures and institutions or the exploratory cyberattacks against state elections systems. Are there indictments in the works about those or other matters?

Finally, and most importantly, there remains the unanswerable question about what the political consequences might be of wherever Mueller’s work leads. If he is nearly complete, that is good news for the president and Republicans as they defend their majorities in the 2018 midterm elections and then Trump seeks a second term in 2020. If the special counsel has more up his sleeve, those assumptions might change — and as Americans have learned over the past year, only Mueller knows for sure.