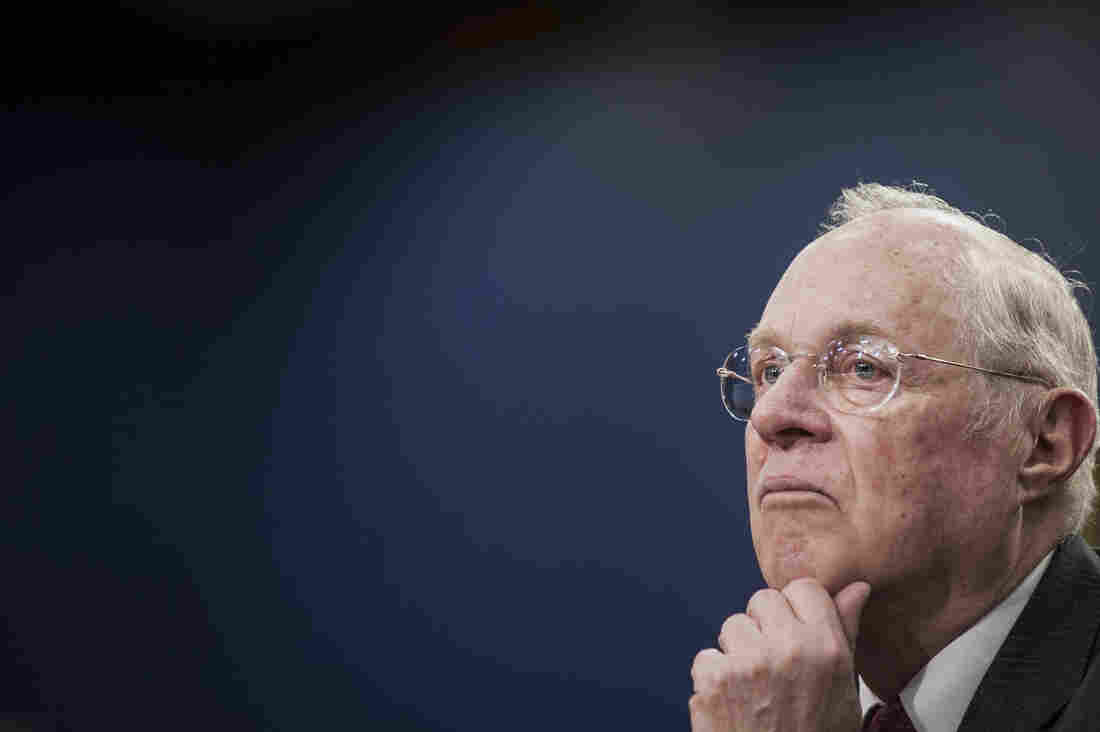 Justice Anthony Kennedy, seen here during congressional testimony in 2015, has played a pivotal role on the Supreme Court since he was sworn in 30 years ago. Pete Marovich/Bloomberg via Getty Images hide caption 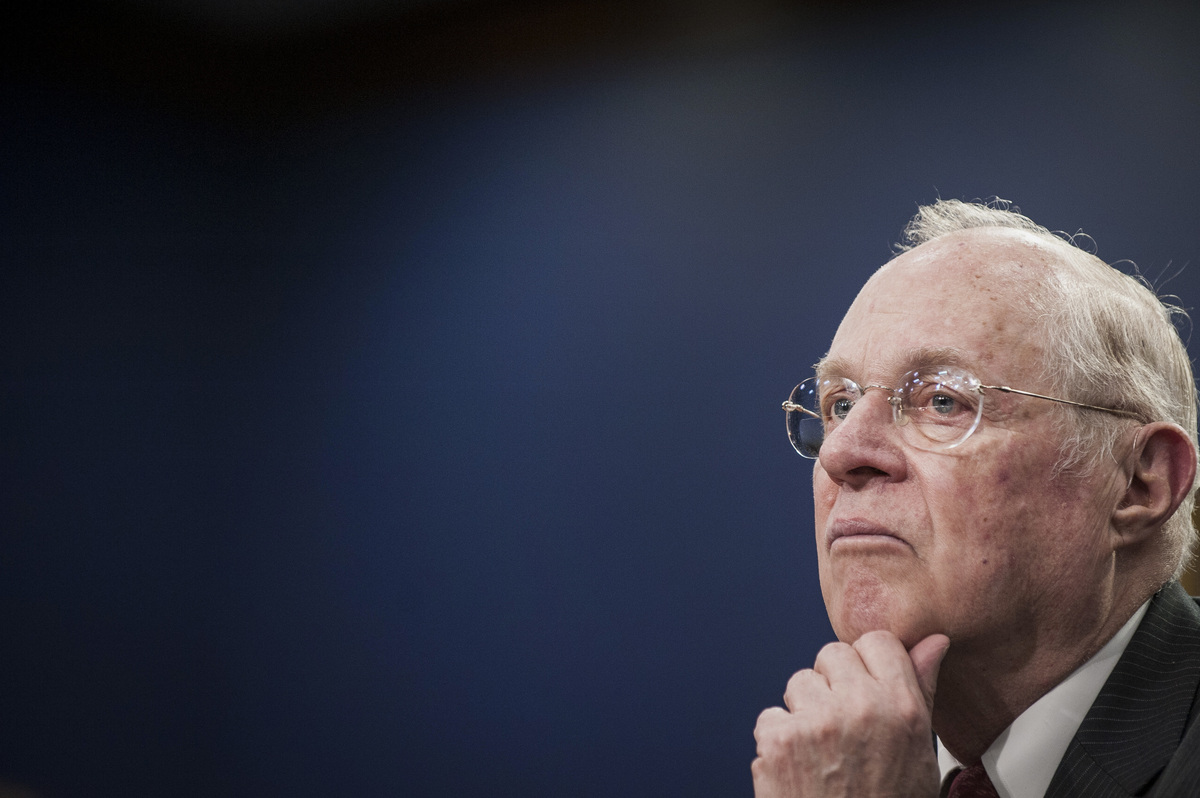 Justice Anthony Kennedy, seen here during congressional testimony in 2015, has played a pivotal role on the Supreme Court since he was sworn in 30 years ago.

Justice Anthony Kennedy announced Wednesday he would be retiring from the Supreme Court. With him goes his three decades of experience on the bench and, more politically pressing, his moderate legal philosophy.

It was this centrist streak that made his vote the key in many deeply divisive cases — so many, in fact, that Kennedy earned himself a reputation as the court’s quintessential “swing vote.”

Kennedy himself was no fan of the term. “The cases swing,” he once said. “I don’t.” But when the high court’s conservative and liberal blocs appeared at a stalemate — a fairly frequent occurrence in recent years — it would be no surprise to find his name in the slim majority when the ruling was released.

On the occasion of his retirement, it’s worth a look back on some landmark 5-4 rulings that were likely decided by a single vote — his.

One need not look far.

On Wednesday, the day of Kennedy’s retirement, the Supreme Court ruled 5-4 for a child-support specialist who challenged an Illinois law requiring government workers to pay partial union dues, even if they’re not members, to cover the cost of negotiations on their behalf.

Mark Janus argued he should not be responsible for any collective bargaining fees if he has opted out of the union — and the high court’s majority, including Kennedy and the conservative justices, agreed.

The ruling dealt a significant defeat to public employee unions, which have had a pillar of their financial support knocked out from under them.

Perhaps nowhere is it expected to have a greater impact than among teachers unions, which, as NPR’s Cory Turner and Anya Kamenetz report, stand to lose members, money and influence in debates over education reform, among other things.

Just one day earlier Kennedy joined the court’s conservative justices in a decision on the Trump administration’s travel ban, which bars visitors from eight countries, six of which have Muslim majorities.

The ban had undergone several revisions since its chaotic introduction just days into Trump’s presidency, but each one had been rejected by lower courts as either illegal or unconstitutional.

The high court disagreed with those rulings, finding that the proclamation falls “squarely within the scope of Presidential authority.”

President Trump celebrated the ruling as a “profound vindication” of his immigration policies, which have drawn significant backlash for years, dating back to the first moments of his presidential campaign.

It is also likely to have an outsize impact on the office of the presidency itself, having affirmed the chief executive’s broad powers to dictate immigration policy as a response to changing conditions abroad.

Read the full opinion and dissents.

In the case that effectively legalized same-sex marriage nationwide, Kennedy cast his pivotal swing vote with the liberal bloc and wrote the majority opinion.

“It would misunderstand these men and women to say they disrespect the idea of marriage. Their plea is that they do respect it, respect it so deeply that they seek to find its fulfillment for themselves,” he wrote.

“Their hope is not to be condemned to live in loneliness, excluded from one of civilization’s oldest institutions. They ask for equal dignity in the eyes of the law. The Constitution grants them that right.”

Reporting at the time, NPR’s Nina Totenberg was not shy in assessing the case’s importance.

“This is probably right up there with Brown v. Board of Education, and Roe v. Wade — if you like it or hate it — and today, Obergefell v. Hodges,” she said. “This was a historic moment.”

Two years before Obergefell, Kennedy joined liberal justices in Windsor and wrote the majority opinion to strike down the 1996 Defense of Marriage Act.

The law defined marriage as “a legal union between one man and one woman as husband and wife,” and in so doing barred same-sex spouses from receiving federal recognition in matters of tax filing and insurance benefits, among other things.

According to Kennedy’s opinion, issued in June 2013, it also denied same-sex couples their Fifth Amendment right to “equal liberty.”

Kennedy joined conservatives in the majority to hold that corporate donations to political campaigns are protected by the First Amendment.

“If the First Amendment has any force,” Kennedy said in the opinion he wrote for the majority, “it prohibits Congress from fining or jailing citizens, or associations of citizens, for simply engaging in political speech.”

The decision radically changed decades of campaign finance law by striking down limits on corporate and union political spending. And it changed the face of politics itself.

In this landmark Supreme Court case addressing the Second Amendment, decided precisely a decade ago Tuesday, Kennedy joined the conservatives.

The court sided with Dick Anthony Heller, a special police officer who challenged a D.C. regulations that kept him from having a handgun at home.

Defying a precedent set nearly seven decades earlier, the justices in the majority defined the amendment as saying individuals — and not just groups — enjoy the right to bear arms.

But there were limitations on that right, the court noted. Kennedy was the deciding vote, “and it has long been assumed that the caveats in the decision were the price of his vote,” NPR’s Nina Totenberg wrote earlier this year.

“When a juvenile offender commits a heinous crime, the State can exact forfeiture of some of the most basic liberties,” Kennedy wrote in the majority opinion, “but the State cannot extinguish his life and his potential to attain a mature understanding of his own humanity.”

In an unusual move, the majority opinion was written by not one but three justices, including Kennedy. And it featured no clear ideological split, with the liberal-leaning Sandra Day O’Connor joining her conservative colleagues in dissent.

In so doing, the majority opinion — in an unusual move, written by not one but three justices, including Kennedy — introduced the “undue burden” test, which asserted that a state cannot make laws that impose “substantial obstacle in the path of a woman seeking an abortion before the fetus attains viability.”

The test has become a key factor in cases addressing abortion in the years since — including in Whole Woman’s Health v. Hellerstedt, another closely argued decision released nearly a decade and a half later.

In that 5-3 decision — delivered by a shorthanded court just months after Scalia’s death in 2016 — justices in the majority relied on the undue burden test to strike down a Texas law limiting abortion availability.