Football isn’t always just about who wins the trophies at the end of each season. Staying alive for at least another year, just when everyone else had written you off, can be the most euphoric feeling.

Taking examples from England, Germany, Italy and Portugal, here’s a look back at nine of the most unlikely relegation escapes from recent memory. 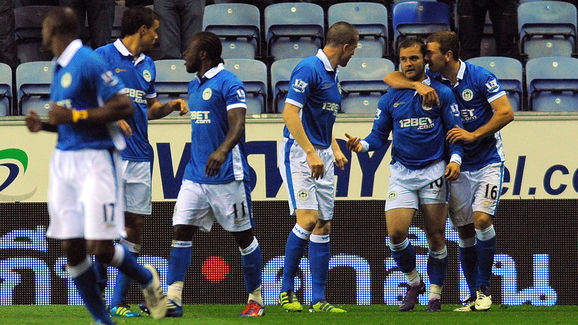 Wigan famously dented Manchester United’s Premier League title hopes in the closing stages of the 2011/12 season by beating their north west neighbour for the very first time to a run of 13 straight defeats in the usually one-sided fixture.

But not only did that result have a huge impact on the title race, it was crucial to the Latics’ survival hopes, with other wins against Liverpool and Arsenal also coming around that time.

All in all, Roberto Martinez’s team somehow managed to win seven of their last nine games to escape the drop zone and actually finish a healthy seven points clear of danger by the end of the season.

Goals scored was the incredibly narrow margin that kept Eintracht Frankfurt in the Bundesliga on the final day of the 1998/99 season, with a huge 5-1 win over Champions League-chasing Kaiserslautern enough for survival as various permutations manifested.

Two clubs had already been relegated, but as many as five were still in danger ahead of that last game, with Hansa Rostock and Stuttgart both winning to ensure they weren’t sucked in.

As it was, Nuremburg, who started the day in the relative safety of 14th place (of 18) and initially had a far superior goal difference to Frankfurt, were the ones who fell through the trapdoor after losing to fellow scrappers Freiburg.

Being bottom of the Premier League table on Christmas Day typically meant that a team was destined for relegation at the end of the season. That was until West Brom finally broke the curse at the end of the 2004/05 campaign with an unlikely great escape.

The Baggies actually started the last day of the season bottom of the table, but it was so tight that any three of four teams could still have been relegated.

And while West Brom were able to beat Portsmouth 2-0 in their crucial final game, Norwich, Southampton and Crystal Palace all failed to win and went down instead.

Sunderland were only the second ever Premier League club to escape relegation after being bottom on Christmas Day when they pulled off an impossible escape at the end of the 2013/14 season.

Sacking manager Paolo Di Canio a few weeks into the season, the Black Cats picked up just one point from their first eight games and went on a similarly awful run under replacement boss Gus Poyet later in the season from February to April that left them seven points adrift of safety.

A draw against eventual champions Manchester City turned the tide, before a stunning run of four straight wins against Chelsea, Cardiff, Manchester United and West Brom saved them.

What made Leicester‘s fairytale Premier League title win in 2015/16 even more remarkable was that the Foxes had pulled off an incredible escape from certain relegation a year earlier.

Nigel Pearson’s team had won just four of their first 29 games and, having been bottom at Christmas, were seven points adrift of safety when domestic football paused for an international break at the end of March.

Cue four wins on the bounce to rise out of the relegation zone, while three wins and a draw from their final five games saw Leicester actually finish as high as 14th in the end.

In what was their first ever season in Serie A, Calabria-based Crotone looked destined for an instant return to Italy’s second tier almost as soon as the 2016/17 campaign began.

The club didn’t win a game until the end of October and had only nine points from a possible 51 by the time Christmas and the winter break came around. Results still remained poor in the New Year.

But as so often seems to be the case for teams pulling off great escapes, the March international break proved to be a key turning point. Crotone suddenly burst into life, winning six of their remaining nine games to rise to the sanctuary of 17th place.

Losing 2-0 against Manchester City with just 20 minutes of their 36th Premier League game of the 2007/08 season left to play, Fulham were poised to be relegated.

Yet an incredible late comeback sealed with an iconic stoppage time Diomansy Kamara winner kept the Cottagers alive. Even then, they were still in trouble and three points from safety.

Inspired by the management of Roy Hodgson, Fulham managed to win both of their last two games, one against relegation rivals Birmingham, to stay up against the odds. The very next season they finished 7th to qualify for Europe and were in the Europa League final by 2010.

West Ham started the 2006/07 season by announcing the incredible double signing of Argentine talents Javier Mascherano and Carlos Tevez, yet things quickly turned sour and by early March the Hammers were rock bottom and 10 points adrift of safety.

Mascherano had left at the earliest opportunity, but Tevez remained and inspired an unbelievable late run of form that saw the team win seven of their last nine games.

The great escape culminated in a 1-0 win over champions Manchester United at Old Trafford, with Tevez scoring the only goal that day and actually joining the Red Devils a few weeks later.

Portuguese side Tondela reached the Primeira Liga for the first time in their history in 2015, but their stay in the top flight would have been limited to a single season had it not been for a miraculous last ditch escape from certain relegation.

Hailing from a small town in northern central Portugal, the club had managed a paltry tally of just 10 points from their first 23 games. Even after a win at the end of February they were 11 points adrift of safety when they were hammered by Benfica in March with only eight games left.

The unthinkable happened as Tondela suddenly started getting results, including a shock win over Porto, collecting 17 points from the last 24 on offer to survive by a point. Remarkably, a similarly late run 12 months later then saw them stay up on goal difference in 2016/17.

This article is brought to you by The Meg – in cinemas this August.

Check out the trailer below: