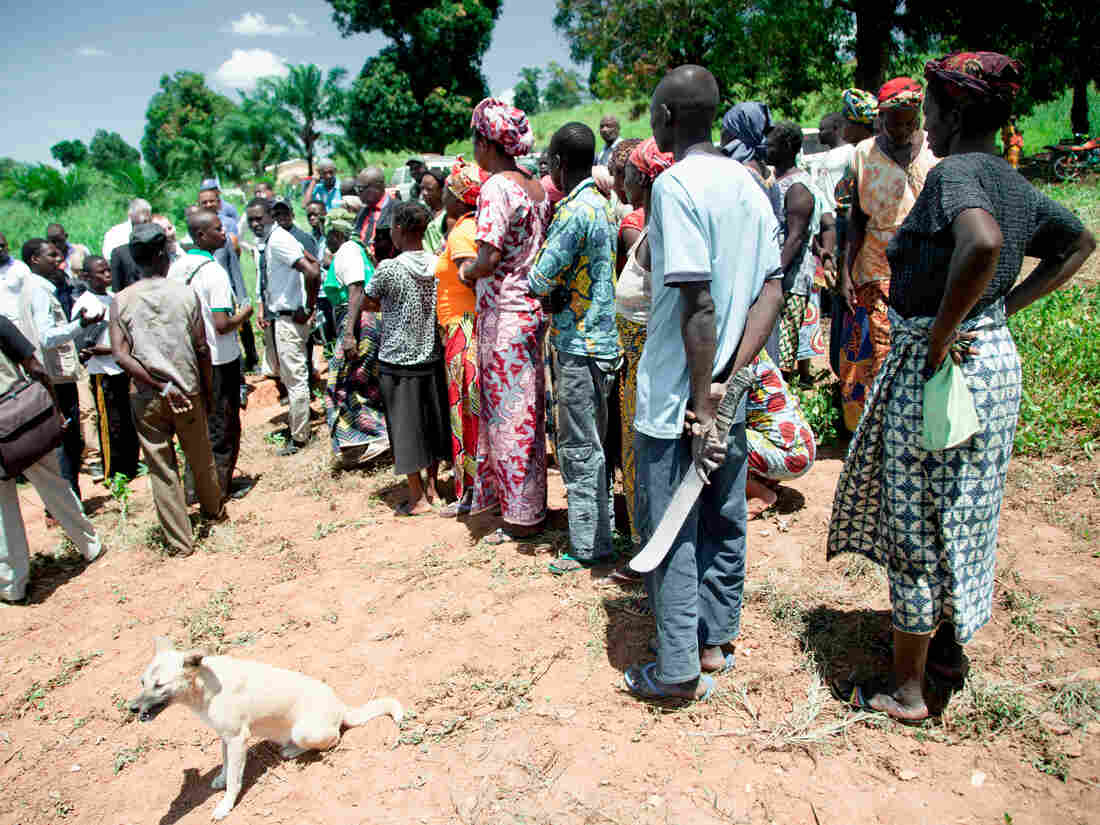 Former fighters and refugees wait in Bambari for the arrival of a delegation from the U.N. Food and Agriculture Organization. Florent Vergnes/AFP/Getty Images hide caption 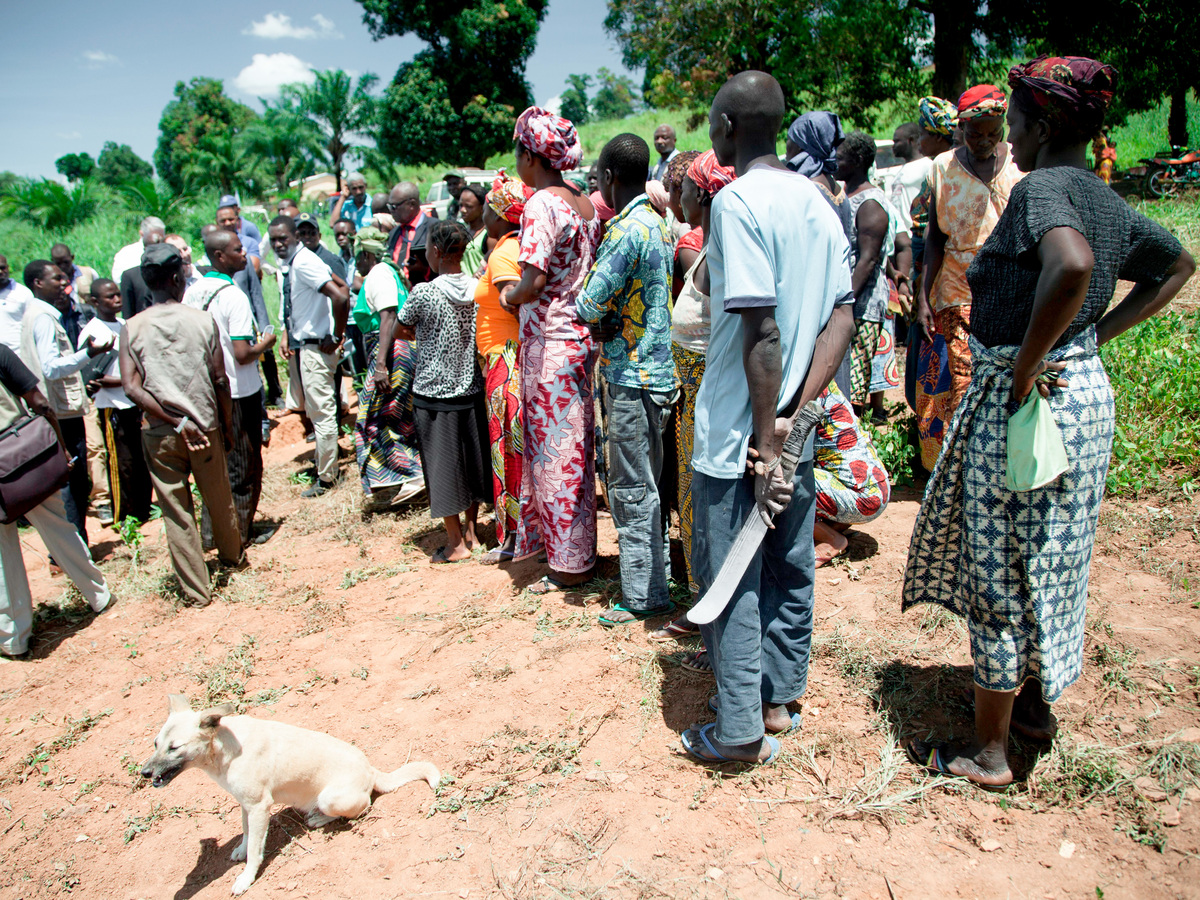 Former fighters and refugees wait in Bambari for the arrival of a delegation from the U.N. Food and Agriculture Organization.

At least nine humanitarian compounds have been looted in recent weeks amid a new wave of violence in the Central African Republic’s second-largest city of Bambari – prompting many NGOs to temporarily suspend or curtail assistance to an already-struggling civilian population.

“We reduced hugely the operations,” said Baptiste Hanquart, spokesman for a coalition of international NGOs in CAR. “The situation is really bad.”

The retreat of humanitarian aid risks creating further deprivation and hardship for one of the world’s poorest countries.

Conflict has plagued CAR since 2013, when a predominantly Muslim rebel coalition overthrew the government. Largely Christian militias formed to fight back. Violence has spread and intensified over the past year – nearly 700,000 civilians have been displaced by fighting, double the number from just over a year ago.

While CAR has long been one of the world’s most dangerous countries for humanitarians – with more than 60 attacks targeting aid workers reported in the first quarter of 2018 – the incidents in Bambari are particularly troubling given the important role the city has occupied in broader peacekeeping and stabilization efforts.

Bambari, home to 54,800 people, had been hailed as a model for successful disarmament – dubbed the “villes sans armes,” or weapon-free city, by the U.N. peacekeeping mission known as MINUSCA. That’s because MINUSCA in February 2017 asked a rebel group known as the UPC to leave Bambari to prevent bloodshed – though the UPC set up a new base not too far away.

While UPC fighters no longer openly paraded with arms in Bambari’s streets, humanitarians have long said their presence was still felt in the city.

Many humanitarians said pushing the UPC out only moved the problem elsewhere – and now the fight has come back.

The new wave of violence in Bambari started in mid-May. Both the U.N. and the city’s mayor blamed the UPC for playing a role in the events – which saw armed men attack the police station, torch houses and occupy official buildings. At least 24 people died.

The mayor told the AP the attacks were in retaliation for the deaths of UPC members during a robbery outside the city. But the real roots are unclear.

MSF said in a May 17 statement that the city was once again a “battlefield of armed men — its streets are deserted, houses burnt.”

The incidents have underscored the limitations of even a “model” city.

“We were all caught by surprise but it surprised no one,” Hanquart explained. “We knew it was extremely fragile, we knew the capacity of MINUSCA to secure this city as soon as something unusual would happen, is none, because they are overstretched everywhere.”

When the gunfire first broke out in Bambari, most aid organizations hunkered down and halted activities — such as medical services, food and water distribution — for two days. After a brief lull in fighting, some services resumed. But heavy fighting broke out again on May 26, prompting NGOs to regroup in one compound.

Widespread looting accompanied the violence – hitting a Catholic church and a number of private homes. And the U.N. humanitarian agency said “looting of humanitarian organizations” and “aggressions” against aid workers “systematically” took place – with nine humanitarian compounds and warehouses looted in the last two weeks of May alone.

While the full scale of the looting was not immediately clear, the U.N. humanitarian agency said NGOs suffered “huge losses of equipment and materials.“

Hanquart said “the whole town turned crazy” when the fighting started — “chaos reigned so everyone was taking the opportunity to loot” whatever they could. Bases evacuated by humanitarians were later ransacked.

“They really emptied the places,” Hanquart added. “Air conditioning systems, beds, tables, everything they could.”

The base and office of JUPEDEC – a leading Central African NGO – were “completely looted,” the organization said.

In addition to temporarily suspending or limiting their activities in Bambari, several NGOs evacuated staff to the capital city of Bangui, some 236 miles away.

MSF – whose compound was also hit – was among them, according to Paul Brockmann, the organization’s head of mission in CAR.

“I have a lot of traumatized people on the team,” he said, adding that MSF organized an emergency transport to get more than a dozen employees out of Bambari – including surgeons and nurses. Only a handful felt comfortable remaining.

He praised the efforts of MSF staff and local partners in continuing to keep their hospital running as best they could.

“We do not want to suspend [fully],” he said. “The humanitarian medical needs have grown because of this insecurity Without our presence there, the population has even less access at a time when what they need is more.”

CAR ranks last on the U.N.’s Human Development index. More than half the population of around 4.6 million is in need of urgent humanitarian assistance, according to the UN. Against that backdrop, the international humanitarian response plan for CAR, calling for $515.6 million in 2018, is just 16.4 percent funded.

And the needs in Bambari are acute. Aid organizations offer a range of services – from health care to food and water distribution – in the city, which hosts around 37,000 displaced civilians.

“If NGOs in Bambari are being hit in this way, it’s a bad indicator,” Brockmann added. “If we’re being hit, imagine how much worse it is for the population.”

MINUSCA said last week that despite efforts to secure the city, “instability and violent incidents persist and fuel tensions within the local community.”

“Deliberate and continuing attacks against MINUSCA and humanitarian workers could constitute serious crimes for which the perpetrators and their leaders will be held accountable,” the mission said in a statement.

In the meantime, several NGOs are waiting for the situation to stabilize before fully redeploying.

“There’s an immediate impact on the population of course and on our capacity to deliver the needed humanitarian assistance,” she said. “It’s the population who is paying a very high price.”

But she said NGOs can’t be blamed for taking precautions – security is of the utmost importance.

“We used to operate very peacefully and without any problems from the population or the armed groups,” Rochdi said. “We are becoming a target which in itself is very worrisome.”

She expressed gratitude and deep admiration for the dedication of Bambari’s humanitarians.

“Other people would think we are crazy but we are not crazy – we are committed,” Rochdi said.

“This is not the time to give up because otherwise it means that the spoilers are winning,” she added.

Cassandra Vinograd is a freelance journalist working in Africa, Europe and the Middle East. She previously worked for NBC News, the Associated Press and The Wall Street Journal. Reach her @CassVinograd