From the outside looking in, it looks to be a foregone conclusion as to who wins this group but for second place, however, it’s a completely different story.

Germany are one of the favourites to win the tournament overall, and have managed to maintain their impressive form leading up to this game, despite losing to Brazil and Austria.

On paper, there’s not much to separate Mexico and Sweden as they scrap it out to secure second place, El Tri will have a few tricks up their sleeve when they face off against ‘Die Mannschaft’, as they look to steal a march on their Swedish counterparts.

Mexico will have it all to play for as the underdogs in this game and will aim to make life as difficult as possible for Germany. As a potential surprise package in this group, this shapes up to be an exciting game. 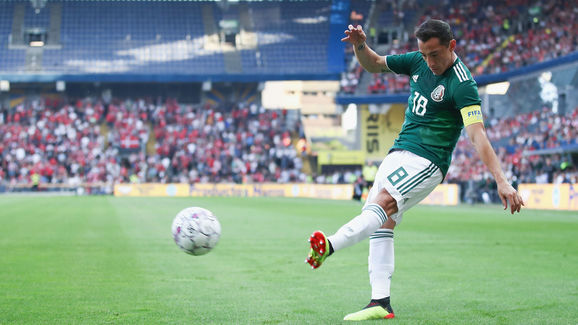 Toni Kroos is probably of the best defensive midfielders in the world – powerful and pinpoint accurate with a cool and composed head, there are not many players who can control the tempo of a football match better than him.

Once upon a time, Andres Guardado was linked with the top clubs in Europe. Now plying his football for Spanish outfit Real Betis, the 31-year old midfielder still possesses star quality, and could have a hand in any fortunes that may come the Mexican’s way.

The full-backs will be an important area of focus as there is some serious talent on show in the wide areas of the pitch.

Bayern Munich’s Joshua Kimmich had a sensational season, stamping his authority in the starting eleven with a series of impressive performances. With eleven assists last campaign, his influence will be felt if his club supply chain can be replicated for his country.

Jesus Gallardo, Mexico’s left back, will have plenty of work to do having to deal with the young Bayern protégé, and his discipline and resilience will really be tested here. Playing week in week out for the Mexican outfit UNAM Pumas, the 23-year old does have plenty of pace in his locker but his defensive duties will have to be up to scratch in order to stop the German full-back.

This game could all be based on what sort of performance Guillermo Ochoa puts in for Mexico in goal. Germany could also start Mario Gomez or Sandro Wagner in the lone striker role, but it’s unlikely that Joachim Low will change his principles now.. The logical, and most likely decision, will be to play RB Leipzig striker Timo Werner up top.

Mexico’s back line have been fairly solid in recent times, though they were breached three times by a rampant Belgium side. Werner’s pace and movement will test out their skills once more, with his sharpshooting abilities even more of a concern. Ochoa will need to be on alert at all times, as he aims to prevent the German whizkid from firing his country to opening game glory