Belgium head to the World Cup this summer with an overriding sense that it’s now or never for Les Diables Rouge.

This current crop of Belgian stars have been repeatedly labeled as the nation’s golden generation, but the Red Devils have largely disappointed in recent tournaments. Belgium went out at the quarter-final stage to eventual finalists Argentina in 2014, but lost to Wales 3-1 in embarrassing fashion during Euro 2016.

Even so, Belgium will once again be dark horses to make the final in Russia, thanks to the considerable talent the small nation boasts within its playing ranks. The likes of Eden Hazard, Kevin De Bruyne, Dries Mertens, Romelu Lukaku, Jan Vertonghen and Toby Alderweireld are enough to contend with any team in the world on their day.

Here’s a look at how Belgium qualified for the World Cup, their group stage games and a possible route to the final.

Belgium strolled through their qualifying group with ease, making light work of a group that included minnows in Gibraltar and Cyprus, but also some teams worthy of respect in Greece and Bosnia and Herzegovina.

In the end, it made no difference as Les Diables Rouge swept all before them, scoring 43 goals (the joint most among UEFA teams alongside Germany) and only conceding six en route to a comfortable first-place finish in qualifying group H.

Their closest challenge came from Euro 2004 champions Greece, who finished second with 19 points. The Piratiko were the only team to take any points from Belgium, holding them to a 1-1 draw in Brussels.

Still, Belgium topped the group with 28 points from a possible 30, and became the first European team to qualify for the World Cup in September 2017. If either Belgium or England fail to get out of group G, it will undoubtedly be the biggest shock of the World Cup. The only real question is which country will win the group and who will be the runner-up.

It’s convenient that Belgium and England meet in the last group game on June 28th, and not solely because the players will be familiar with one another as most of Belgium’s squad ply their trade in the Premier League (Tottenham alone have three players in Vertonghen, Alderweireld and Mousa Dembele).

Both nations will likely have secured automatic qualification by that point, so expect to see a fairly timid match as both sides will look to rest players and not incur any injuries as they look to see who they face in the knockout stages.

Unless, of course, Martinez or Southgate desperately want to avoid a particular team from group H… 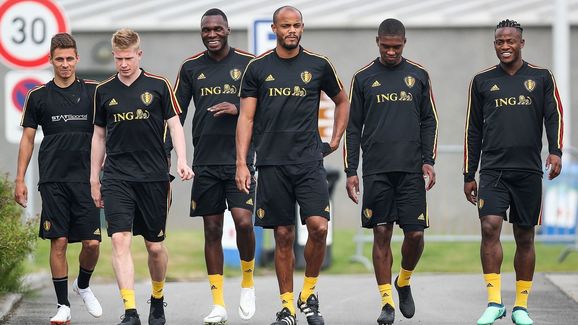 The popular opinion among fan and pundit alike is that Belgium will indeed top group G, thus setting up an intriguing route to the World Cup final.

It would begin with a knockout match against either Poland or Colombia (though don’t underestimate the capabilities of both Senegal and Japan to steal second place in group H), both tricky opponents in their own right – yet neither have the defensive talent to stop the attacking powers Belgium possesses.

A win there would set up a quarter-final against probable opponents Brazil, who will be on an almost blood-lust revenge tour to get their hands on the Germans and make up for the 7-1 battering they took at their home tournament four years ago. But the Seleção could enter this game with a little too much confidence and not think of the task at hand, and Belgium aren’t exactly pushovers. All it takes is one mistake and Belgium could knock off one of the tournament favourites to move to the semi-finals.

There the Red Devils would most likely face France to set up a mouth-watering local derby, but Portugal, fresh off their Euro 2016 triumph, could also be the opponent.

Take care of business against Les Bleus, and Belgium would find themselves in their first-ever World Cup final. Belgium announced their final 23-man World Cup squad on June 4th, and is as follows: Roberto Martinez is already bearing the full wrath of Belgium’s media and fans after omitting Radja Nainggolan from the squad, saying that it was ‘purely a tactical decision’.

He has another headache to worry about too, as skipper Vincent Kompany picked up a knock against Portugal in a recent friendly, and now faces a fight to be fit for their first game against Panama on June 18th.

Assuming Kompany will be fit, Martinez is likely to stick with some variant of the 3-4-2-1 formation he has favoured recently.

There’s a reason Belgium are only underdogs to make it to the final, and not one of the favourites. On paper, they boast enough talent to challenge the world’s best on any given day – but when has paper ever beaten the harsh realities of a World Cup pitch?

In the past, questions have been asked about the team’s unity. In this tournament, they will focus on the capabilities of Martinez. Having already made a bold (some would say stupid) decision to leave Nainggolan at home, he has work to do to make sure the fans and media are behind the team, and that the team itself remain committed to his plan.

If the Red Devils do that, they could go far – they might even cause a shock by taking out Brazil. If they can’t at least make it to the quarter-finals, there will be hell to pay.